Your app uses a bad version of WebRTC, which contains security vulnerabilities.

How to fix apps with bad WebRTC versions

One or more of your apps contain a version of WebRTC that contains serious security vulnerabilities. These vulnerabilities can make your app susceptible to remote code execution, and can potentially give an attacker access to your app’s private data.

Hi there, I get the same error in GooglePlay Console for my live app (WebRTC with security issues)

I guess all AppGyver Android builds have this issue or just a few? Is AppGyver aware of the issue? 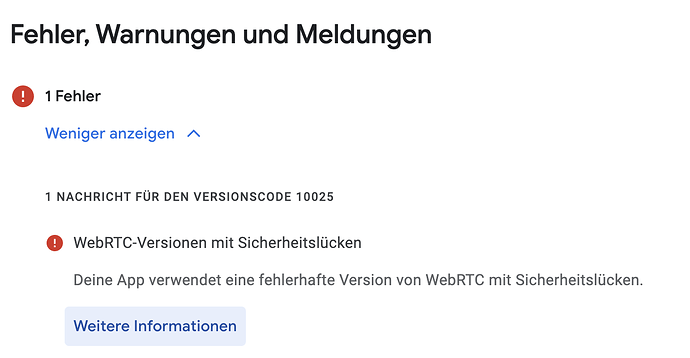 They have known about it but I’m not longer worried about it. I converted my flagship app to an android and iOS app with capacitor and Cordova using only the web build files and the finished product is actually a very high quality app with in app payments and other much needed native dependencies. My bundle is now a fraction of the size of the appgyver native build and now has zero data leaks.

Hey that’s interesting! Does that mean your workflow is 1. building the app structure s in AppGyver, 2. add native features with capacitor or(?) Cordova and then build the app with one of those compilers?

yes. You just export the web build, rename the main folder to whatever you specify in the capacitor command as the web version, then add the different platforms. You finalize the android build in Android studio, and the iOS build in xcode, and you can add native views and components in either your code editor and with the capacitor cli or in Android studio or xcode.

That sounds so interesting… Would you be so kind to share a detailed tutorial on how to do that?

The ability to add an in-app payment will solve the monetization issue that has been around for years.