My WITH_ITEM still overwrites data instead of adding to list 🧐

Trying to add a new object to this list

Hi. I am also having problems with the WITH_ITEM formula when trying to add a list of objects in pageVar to a list of object in Firebase. In the end, I started a new collection to solve this.

It is not always wise to create new collections as an easy solution as this practice increases the number of reads… and subsequently your Firebase bill.
Will share any findings as I’m still researching… unless some good soul can help in the meantime. 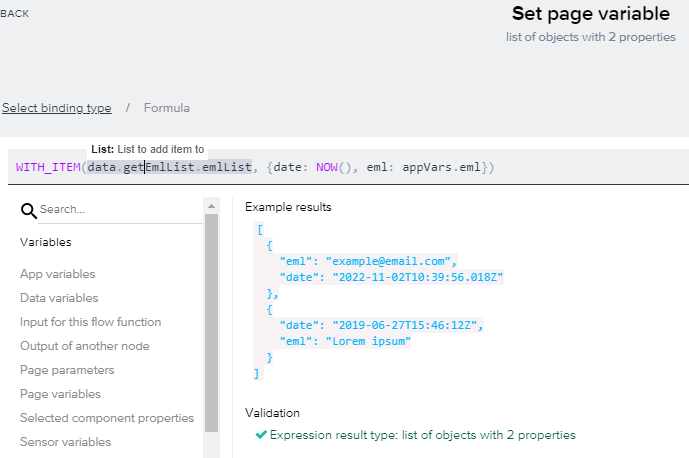 The pageVar WITH_ITEM formula gets the list of objects from the data variable (see “list to add item to”) set as follows:

And that pageVar WITH_ITEM second part of the formula uses the data your user is inputting (for me: date and eml). That data is an object with 2 properties (date and eml). This must match exactly that schema in the data variable which has a list of objects with the same 2 properties.

Once that pageVar is all set, just attach an update record flow function to it and assign the content of the pageVar to its value like so:
The data resource must have the exact same schema: a list of objects with the same 2 properties, same property names. 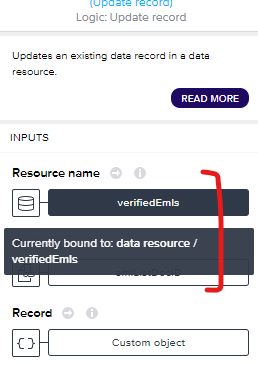 Critical because when you assign the value to the record field, you’ll find the list of objects in question:

…to which you assign the value of the pageVar (which is a list of objects with 2 properties):

Thanks!!
In the meantime, I had figured out the pageVar challenge by looking at what you had done for adding a new Service to a list of services. The struggle was with Update Record, which ended up being a ridiculously simple set up. It is all about understanding.

Thanks for the help! Will try this method in my project! Yup, as you said, it is all about understanding.

Thanks for the suggestion! It really is a thing that easily being overlooked. Will keep this in mind when working on my project.