I am having a weird issue where my page variables aren’t being read by a Create Record node in my logic pane when I try to login to my app after building it in the build service.

The login works perfectly on the preview app.

On the logic pane on the login button, I’ve placed an alert to show what is stored in the page variables prior to the Create Record node in the flow. This shows the page variables are stored correctly as per the email and password input fields on the page. However when you advance in the logic flow to the Create Record node, I’m getting the following Type error: {“code”: “unknown”,”status”:-1,”message”:”TypeError: Cannot read properties of undefined (reading’match’)”,”rawError”:{}}

I’m building it as an .apk file, client runtime version 4.5.10 and installing it directly onto a Google Pixel 2 XL running Android 11.

The login works just fine on the preview version of the app, its just the apk file version that it isn’t working on.

I got an error when building the web app version so I haven’t tested this there.

Has anyone seen an issue before where something was broken in production but working good in the preview app? Any help would be greatly appreciated. 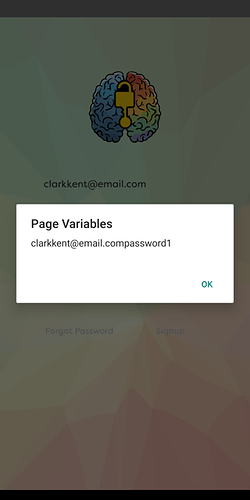 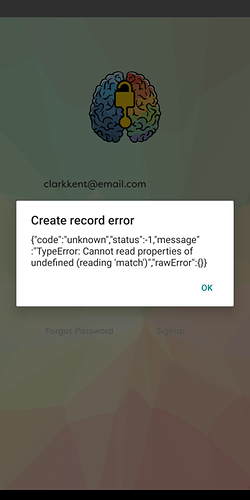 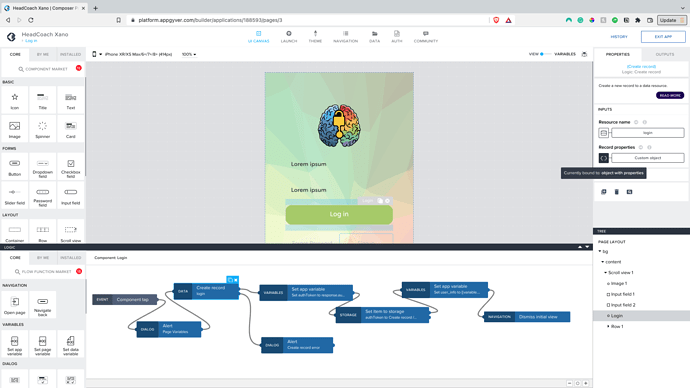 Hey, is there anyone at appgyver that can take a look at this issue? This is still persisting in the new client runtime version 4.6.11.

To clarify, the login API gets called on the preview app but doesn’t on the Android build version so there is an issue that I can’t identify with the tools available.

@Harri_Sarsa I have been working with Eoin on this and have hit a dead end as well. Do you have any insights on the problem or have anyone that could take a look at what is happening with Eoin’s Android build version? Thanks!

I can confirm that this strange behaviour occurs in multiple POST API calls in the production app but any GET API calls are working correctly.

I’ve bypassed the auth and hard-coded my auth app variable to 1 user to confirm that the GET API calls are working correctly. There are 3 instances where I’ve used POST APIs and none of these is getting called from the frontend.

The input variables for the API calls are being stored correctly in the app (as I can see these when I place an alert before the create record node to show me the page variables) but when it passes to the Create Record node, the error message says it cannot read the page variables.

Any help would be much appreciated as I’m under a tight deadline to complete this beta app for my funders!!

Hi, Eoin. Did you solve your issue ? I have same strange behavior after build my app with new runtime ver. I have same “TypeError: Cannot read properties of undefined (reading ‘match’)” error in production.
My app works fine last year. Today I made a small change, added one variable only. Tested it with preview and everything works fine. Then builded it with new runtime version and deployed to appgyverapp.com. On appgyverapp.com non of Create record component works. I don’t see the POST request in the browsers’ developers tools networks tab. But I definitely see the POST request in app.preview appgyver mode. It’s Web App build version.

I have not been able to resolve this issue. Appgyver has yet to explain why this is occurring. I can confirm that the issue does not appear in a new build of the app, but this won’t resolve an issue with an app already in production.